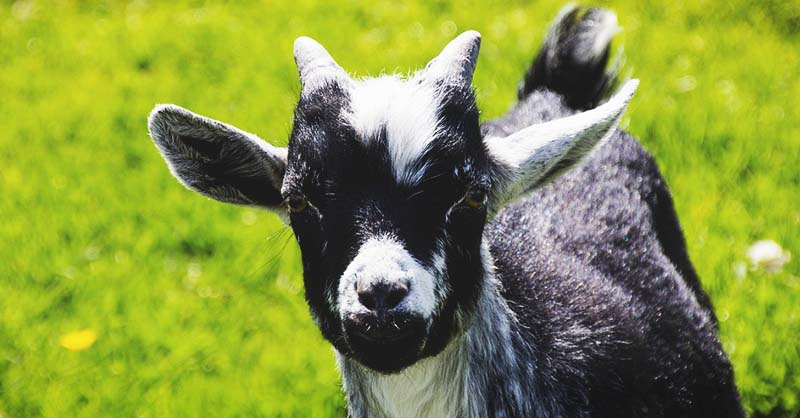 Are you the proud new goat parent of a bouncing baby boy? Male goat kids are sweet when they’re young, but they become fertile quickly.

Most goats are fertile by around seven weeks of age. If you are raising male goats for reproductive purposes, this won’t matter.

However, if that’s not on the cards, castrating goats early on is crucial. There are multiple ways of castration.

I’m going to walk you through each method which should allow you to choose what you’d be most comfortable with and decide which would be best for your goats.

Here’s how you go about castrating goats:

Banding male goats is one of the most common forms of castration because it’s easy to do and isn’t gory.

Before you begin, it’s important to know male goats should be castrated around eight to 12 weeks. Don’t castrate before they’re four weeks old or castrate past four months old.

When you know your kids are in this age range, you’re ready to begin.

Start the process by giving them one CC of tetanus antitoxin. This will prevent the onset of tetanus following this procedure.

If you’re unfamiliar with tetanus, it’s a serious ailment from bacteria which can be found in the ground anywhere. It infects any open wound, and it can kill your goats quickly.

This is an important step. Be sure you don’t skip over it.

2. Gather and Prepare Your Supplies

To properly castrate a male goat kid using this method, requires castrator rings and an elastrator. After purchasing the rings, store them in your refrigerator to make sure they don’t deteriorate in warm conditions.

By storing them in the fridge, they’ll keep their shape better and should remain as strong as they were the day you purchased them. You don’t want the rings to break in the middle of the castrating process.

Soak the rings you’ll use for the process in rubbing alcohol for approximately five minutes before you start the procedure to ensure the rings are sterilized.

3. Hold and Position the Kid

When your equipment is ready to go, it’s time to gather up your goat kid and get him into the proper position.

This will take two people. The one who won’t be controlling the elastrator will have the job of holding the goat kid in place.

This person can either hold the kid’s head in their lap and point their hindquarters towards the person operating the elastrator; or they should grab the kid in the midsection lifting their hindquarters into the air and allowing the kid to support themselves on their front legs.

Once the kid is in position, the person operating the elastrator should hold the tool to where the ring is facing the goat kid.

The ring is opened by squeezing the handles of the elastrator. Place the castration ring over the testicles and scrotum. Be sure it’s placed snuggly against the body.

When placing the ring, make sure you get it around both testicles and ensure they’re below it before removing the castration ring from the elastrator.

After checking on the correct placement of both testicles, stop squeezing the elastrator and remove the prongs from the band.

Do a final check to make sure both testicles are beneath the castration ring, and nothing shifted when removing the elastrator.

You can give the goat’s hindquarters a quick spritz of antiseptic spray when done to deter infection.

The blood flow should be cut off to the testicles, and you will see them begin to dry up. In approximately two weeks, the banded parts should fall off.

There are occasions where one loose piece of skin will remain attached to the goat and keep the male parts dangling.

If this occurs, use a sharp, clean scalpel to slice the piece of skin and remove the parts. Don’t do this prematurely. If three weeks have passed, and the testicles are still barely hanging onto the goat, go ahead and use the scalpel to remove them.

Surgically castrating goats is a much more intense process than banding. It does have some blood involved and requires slicing into the animal.

If you’re unfamiliar with castrating any animal, I’d recommend visiting your veterinarian to castrate the first goat.

They can walk you through the procedure and make sure you’re comfortable before you begin practicing on a living creature.

However, if you’ve castrated an animal before, this will be a walk in the park.

Begin by having someone hold the goat still with their hindquarters facing you. Use a sharp, clean scalpel to slice the scrotum open.

The testicles will fall out. If they’re hanging on by their spermatic cord, slice through it to release the testicles.

They should fall onto the ground. Don’t stitch the scrotum closed as this heightens the chance at developing an infection.

Instead, fill the open wound with antiseptic to deter infection and allow it to drain. This is the best method to avoid infection.

Keep an eye on the kid for the next couple of weeks to make sure infection doesn’t form.

Emasculation is said to be the safest method of castrating goats because there’s no blood involved, and the castration happens quickly.

You’ll use a tool called a burdizzo or a castration plier. Be sure to use the smaller tool meant for goats or sheep.

They’re available for cows as well, but they’ll be much too big and hard to handle.

Have someone hold the goat kid to where their hindquarters are facing you. Slide the pliers between their body and the testicles.

The goat may let out a high-pitched sound. This should be expected because let’s be honest, we’d probably yell too.

Once the squeeze has occurred, the procedure is done, and your goat should be back to normal within 15 minutes.

This is why many people prefer this method because it’s quick and has a fast recovery for the animal.

You now know of three different methods to castrate your male goats. Which one you choose will be based upon your comfort level.

Though this isn’t an easy process for your heart, it’s necessary to avoid over breeding or competition within your herd.